Abington, Massachusetts, May 26, 2020 – Abington Bank has approved over 140 Paycheck Protection Program (PPP) loans totaling more than $8 million, allowing dozens of local businesses across southeastern Massachusetts to keep their employees on the payroll.

The program has helped small businesses like bank customer Brockton Area ARC, a not-forprofit organization that supports children and adults with intellectual and developmental disabilities. In addition to providing family support services, which are considered essential, the organization runs two day-programs out of its Brockton location that together serve more than 100 individuals in southeastern Massachusetts. The programs have been closed since mid-March.

Without reimbursements from MassHealth and the Department of Developmental Services, Brockton Arc Executive Director John J. Lynch said he “worried week to week about whether we could make payroll,” until funding from the PPP came along.

“At first I was looking at this [shutdown] like an endless snow day. But then I thought, ‘Where is the income going to come from? How far can our savings stretch?’” he said. “It was looking more and more bleak.”

The Small Business Administration’s Paycheck Protection Program (PPP) is a small business stimulus program included in the federal government’s $2.2 trillion Coronavirus Aid, Relief, and Economic Security (CARES) Act. The PPP provided an initial $349 billion for SBA lenders like Abington Bank to fund loans to businesses on a first-come, first served basis in order to guarantee eight weeks of payroll and other costs to help businesses remain viable. Funds were exhausted in less than two weeks, but Congress recently provided for additional funding capacity of $320 billion. To qualify, businesses must have 500 or fewer employees and demonstrate that they have been negatively affected by the Coronavirus. If used for payroll and other qualifying expenses, the loans are forgivable.

Though Brockton Arc kept its 30 full-time day-program employees on the payroll since the closure, Lynch said the organization had to furlough 15 part-time employees and was unable to continue paying 45 individuals who participate in their community work program. Lynch said he hoped PPP funding would allow them to both continue paying the day-program staff and recall the part-time and work program employees.

“It’s such a relief to know this funding is coming and that we’re going to be able to make payroll for at least the next eight weeks,” he said. “Without the PPP, we definitely would have had to have more layoffs.” The program also has helped bank customer Stewart’s Power Equipment, a family-owned and operated business located in Holbrook. Co-owner Shelley Stewart said that the three weeks they had a company-wide furlough, including several employees who had been with the company for 15 years or more, were the most difficult in their 32-year history.

“We’ve never had to do anything like that, not even during the downturn in ‘88 when we first started the business or in the recession of 2008,” Stewart said. “But we saw just a quarter of what our business normally is during one of our typically busiest months.”

Though the company has remained open as an essential business, serving the equipment sales and service needs of municipalities, hospitals, and first responders, Stewart called the PPP a “trifecta” in helping them bring back all 17 of their full-time employees in time for their spring busy season.

“To have an eight-week period where we can continue to pay our employees their full time pay without worrying made a huge difference,” she said, adding “The PPP saved us.”

Stewart noted that the PPP could not have come at a better time for their business, with the company having moved into their new Plymouth Street facility—also financed through Abington Bank—in early January, followed by a nearly snowless winter season. “A business like ours is dependent on the weather and the foot traffic in the door, and we just weren’t getting it. Then, bring COVID-19 on top of that,” she said. “We really needed the PPP so we could pay our employees and pay the bills.”

Abington Bank’s commercial lending team worked tirelessly to submit applications on behalf of its small business customers like the Brockton Arc and Stewart’s, knowing that for many business owners, timing was critical. “The financial situation our customers are facing is unprecedented, and we understand the effect it is having on their business, their staff, and the community,” said Abington Bank President Andy Raczka, adding, “I’m proud of our ability to help local organizations like the Arc and Stewart’s by moving quickly to get these funds in their hands. That’s what being a community bank is all about.”

Lynch and Stewart credit Abington Bank’s Senior Loan Officer Mario Sindone and Portfolio Manager Joyce Holbrook for getting them through the PPP approval process quickly and smoothly and for ultimately securing the economic lifeline their businesses needed.

“I cannot say enough good things about Abington Bank,” Stewart said, noting that the company applied for PPP on a Monday morning and received the call after-hours Tuesday that their loan had been approved. “Joyce rushed everything through for us, paid attention to every detail, made sure we had everything we needed, and stayed in contact with us the entire time,” she recalled. “How incredible is that?”

“I was born and raised in Holbrook. This is my hometown bank. This is why I stay,” she said. Lynch said that Brockton Arc had initially submitted their PPP application through another bank but was shut out of the first round of funding. When they learned that additional funding was pending, he said their board members expressed concern that they “might be getting lost in the shuffle of a ‘big bank’” and suggested they apply through a local, community bank like Abington Bank, where they were ultimately successful in securing the loan.

“This time, the process went smoothly and the response from Mario was immediate. He got our application in and, to our delight, we quickly learned we were approved,” Lynch said.

“Thank you very much to Abington Bank,” he added. “We’ll be forever grateful.” In the Photos: 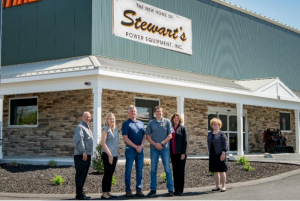 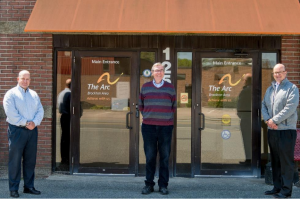