President and CEO Andrew J. Raczka said the scholarships are part of the bank’s longstanding commitment to supporting education through funding a variety of programs that benefit local elementary and secondary schools and their students, including donations used for supplies and equipment; educational enrichment programs and events; school music, arts, and sports programs; and more. The funding also includes a donation of $10 for every new personal checking account opened at Abington Bank, made to one of eight schools or educational foundations located in the towns where the bank has offices. To date, this program alone has provided over $49,000.

“We believe strongly that education is the key to bettering yourself on the road to independence and empowerment,” said Raczka. “Abington Bank is pleased to support students through enriching their educational experience and unlocking their full potential.”

The scholarships were awarded to members of the Class of 2022 who demonstrated academic achievement and who will be enrolled in a four-year program at an accredited college or university this fall.

Brayden Fowler of Avon Middle High School was awarded a scholarship of $1,000 and will attend the Culinary Institute of America.

Andrey Sweet of Cohasset High School was awarded the Abington Bank Edward T. Mulvey Scholarship of $1,000. The scholarship is named for Mr. Mulvey to mark his more than 50-year career at Pilgrim Bank, which merged with Abington Bank, including serving as its president and CEO and chairman of the board.

Lauryn Gedeon of Holbrook Middle-High School was awarded a scholarship of $1,000 and will attend Curry College.

Jaelyn Allen of Old Rochester Regional High School in Marion was awarded a scholarship of $1,000 and will attend Bridgewater State University. 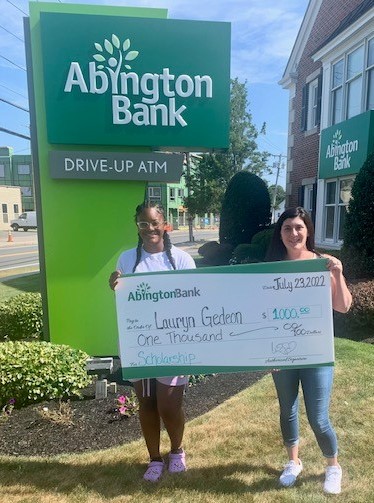